More often than not having tattoos on your body is something really personal. You want to permanently ink something or someone unto your skin in hopes of immortalizing their memories on you. There are a lot of reasons why people would like to get tattoos and it’s because of the meaning which these tattoos imply. There are even cases that tattoos serve as status symbols, a declaration of love, a cal for peace and unity as well as their beliefs.

For more than 5,000 years, tattoos have existed in our society. They can be found in many cultures all around the world. The word tattoo is said to be derived from the Polynesian word “ta” meaning to strike and “tatau” in Tahitian that means to mark.

One of the most popular choices in tattoos is birds. They can be used to symbolize a lot of meanings. You can even find some special meanings that pertain to specific bird species. Birds are said to have a special connection with the gods and the heavens because of their ability to fly. One example would be the bald eagle which symbolizes independence, freedom and patriotism, the bird which is used as a symbol by some courtiers.

Tattoo choices are very personal. There are also tattoos that are made just because they are very beautiful, while some tattoos are chosen for their meaning. An example as well is the parrot that is represented as a guardian for humans because of its usual depiction as human companion.

The swallows are also known for carrying the meaning of “close to home” by the sailors and is used by some to remind them of something close to their traditions, culture or alma mater. People can get bird tattoos for honoring their loved ones and at the same time celebrating things like a second life or survival.

Special birds also hold special meanings such as the Nekhbet. It’s an ancient Egyptian deity that takes form of a white vulture holding shen rings. Shen rings are those images of a hieroglyph of a circle which are placed on a straight line. The bird represents infinity and eternity.

Why Parrot tattoos are popular

If you are a bird lover then you will not get bored of the bird selections that you can choose from. Even if you choose the popular parrot tattoos, the birds can also hold deeper meanings when you choose the right type of parrot as well as their colors and overall design. It’s truly a marvel to get to choose from a variety of beautiful birds that you can freely imprint unto your body.

One of the most common reasons for getting a tattoo of a certain bird is because it may be your pet. Since a lot of people have parrots as their common bird pet, they tend to choose it.

Think about getting a tattoo

You’re not the only one who is stuck in the sidelines if you want to get a tattoo or not. Your friends might have it and you want one too, or you want to immortalize a memory on your skin but you’re not sure if it’s the right thing to do. The key is giving it some time. Don’t be afraid to be on the waiting line. Remember that it is always your choice and you should not be pressured to undergo such practice.

If you are serious about getting then make sure that you do your research well. Pick out a design that you truly love and will hold dear for a long time. Don’t ever get a tattoo that you will regret later on. Think of permanent things that you have in your life. Bear in mind that life is tricky and sometimes you can’t have something forever so think it over thoroughly.
Tips before you get a bird tattoo

Getting a tattoo requires you to be of legal age. Even though it does vary in states just make sure you are not too young to get one.

When you get your tattoo, you won’t be able to donate blood or tattoo a year after. Blood donation is a serious business and the people there will ask you questions to make sure that you aren’t giving contaminated blood. Piercings and tattoos within the last twelve months should be indicated in the form when you fill up for blood donation.

Like any other precaution, make sure that the tattoo artist you are going to is legit. Tattoos and pierces should be done in different areas and of course the place should be hygienic as well. An unkempt shop should already raise red flags.

Also make sure that the equipment the tattoo shop uses, especially the needles, are sterilized and new. They should be taken out from the sealed packages and that the artist is wearing latex gloves for protection. The ink used should also be placed in a cup and never used directly from the bottle. The ink used on you should be disposed afterwards.

Make sure you know what the artist is capable of. Look at his designs and ask him questions beforehand. You should be able to establish a good feeling with the tattoo artist. If you ever feel uncomfortable with the artist then don’t force yourself and look for another one. Ask for recommendations from your friends and look for reviews from their clients. You can surely find a website or page that the artist has set up.

Best of all, enjoy your experience. It might be excruciating but the result is well worth it.

Colorful parrot tattoo by Fernando Biscelgia. Parrots tattoos are one of the most common and favorite bird tattoos. They are said to be symbols of companionship or guardians. 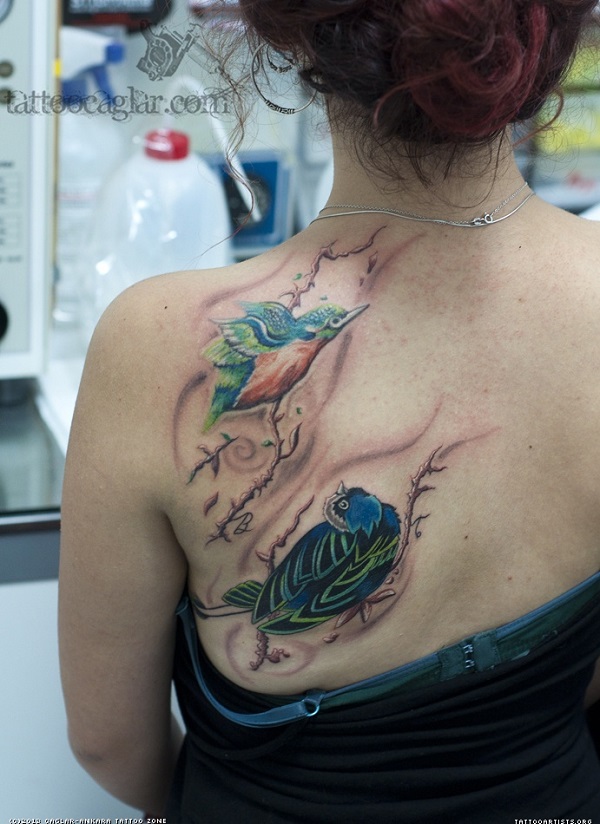 Beautiful bird tattoos. Two colorful birds are shown standing on small branches as they are imprinted eternally on a girls’ back. Amazing bird tattoo by shing88-d5px91e. The light and cheery effect of the colors on the bird makes the tattoo pleasant to look at. How the background is incorporated to frame the bird is also perfect. 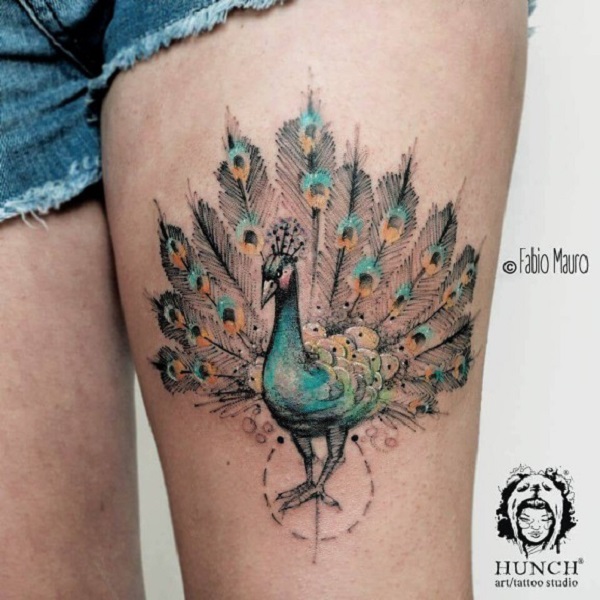 Peacock tattoo by Fabio Mauro. A majestic peacock is drawn flaunting its feathers in blue and orange color theme. A delicate looking bird tattoo by eris09. Definitely attractive with amazing color combination, this tattoo is surely a head turner. 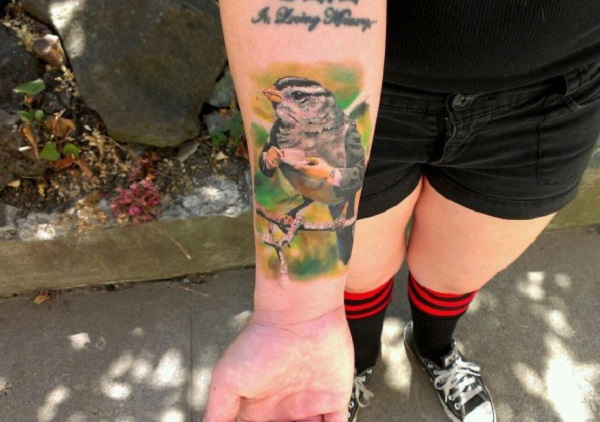 Brett Baumgart’s bird tattoo. A bird that seemingly having human arms and holding a cup of coffee or tea is illustrated in this person’s arm. Bluehyper’s mysterious owl tattoo. The owl throws a vicious look with its red eyes matching the red rose which it is also perching on. 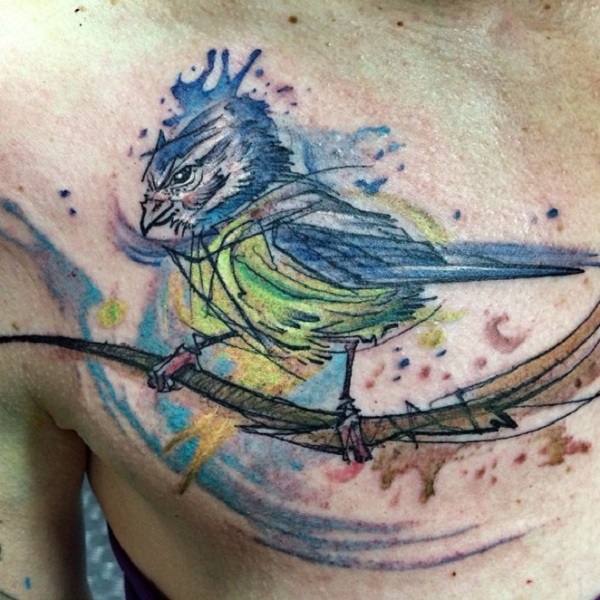 A creative take on a bird tattoo by Bernd Muss. The blue bird is shown to be grasping on a branch as it look onward with determined eyes. 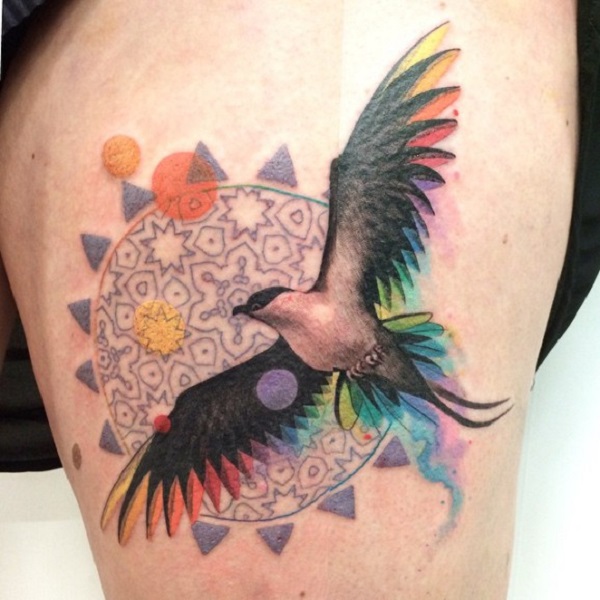 Amanda Chanfreau’s beautiful bird tattoo. The bird’s wings are highlighted in rainbow colors as it flies around a tribal designed sun.

Elegant bird tattoo by Aleksey Platunov. The bird is drawn flying across the woman’s chest and the colors used are mostly black with watercolor style of coloring.

A blue bird with the galaxy tattoo by Adrian Bascur. This wonderful tattoo depicts a bird with a body of the galaxy painted on it. The stars and the entire universe can be seen from the bird down to the branch it’s standing on. 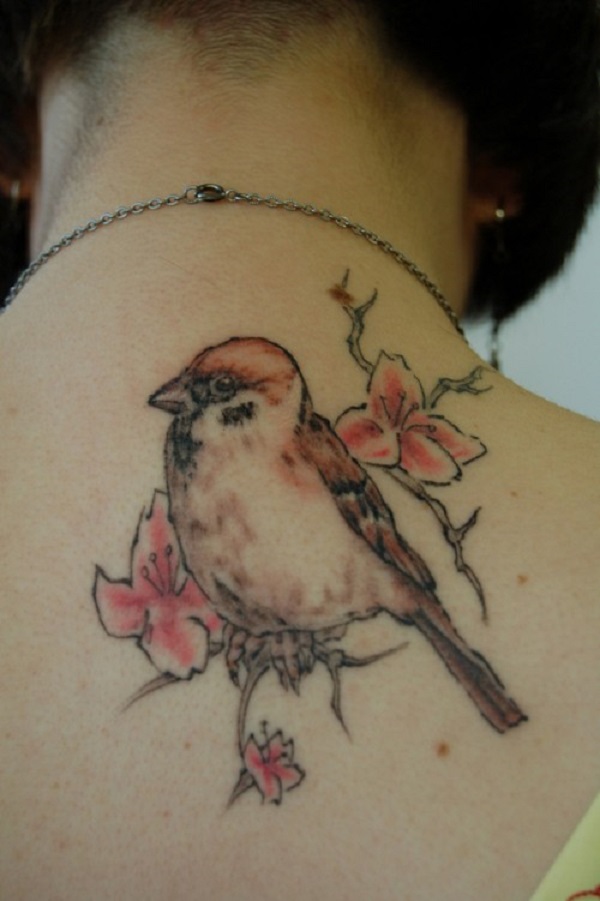 Tattoo of a brown bird framed with pretty pink flowers. Simple, yet meaningful, the bird is drawn on the back part of a woman’s neck and it looks absolutely perfect. 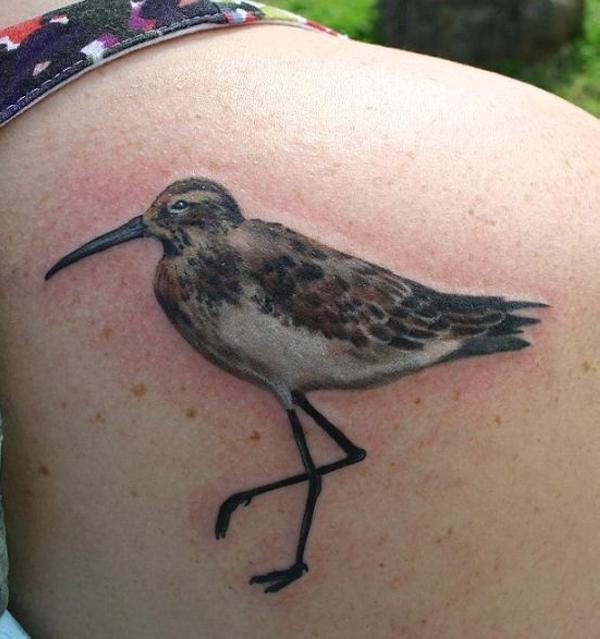 A brown bird waling tattoo painted on the shoulder. Simple, direct and has wonderful color combination. A clean looking tattoo that looks great even from afar. Dark bird tattoo with a skull. Mysterious and aggressive at the same time. The bird and its striking eyes are shown to be invincible and strong. 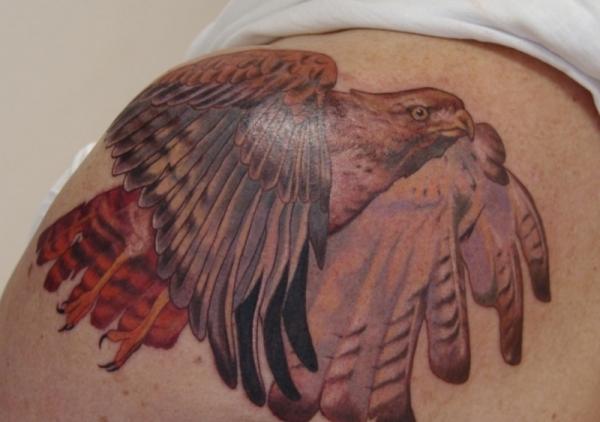 Brown eagle tattoo. The eagle is drawn to be flying while looking straight on without fear and with full of determination to reach its goal. Tattoo of birds fleeing the cage. A really moving design that implies freedom and independence. Beautiful blue and white bird tattoo. The bird is also carefully drawn with twigs and branches of a tree framing it delicately. An endearing blue bird tattoo with a halo and a rose. The bird’s wings are given emphasis as it is drawn spread out and in full detail. 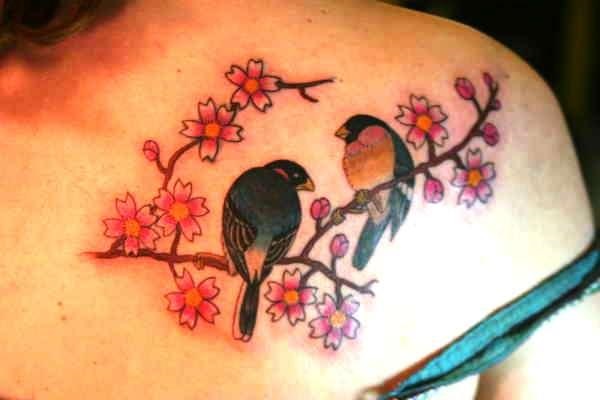 A tattoo of two birds perched on a branch with flowers. A simple yet amazing depiction of birds enjoying the serenity and the calmness of the surroundings. Ink tattoo of a bird on a branch. This is another type of tattoo wherein there is no other colors used aside from the black ink that encompasses the details of the bird. An elegant and pretty bird tattoo by Mo Mori. This tattoo designs stands out because of how it was softly drawn and colored with vibrant hues which brings out the full detail of the bird. Tattoo of a bird in flight carrying a bracelet with letter charms. A rather thought provoking tattoo that may have deeper meaning into it considering the letters that the charm puts together could be initials of someone special for the tattoo holder.

Beautifully detailed bird tattoo. The bird is drawn to be sitting on a branch and is colored in periwinkle, purpled and melon hues with a blue background which complements all of the colors. 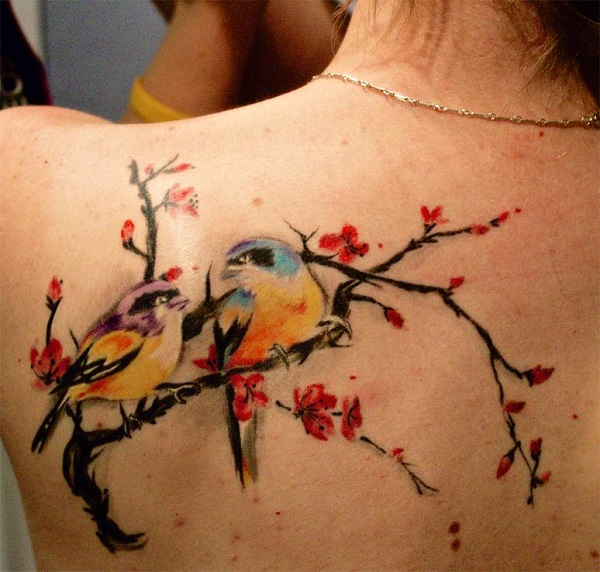 A very pretty looking tattoo of two birds perched on a branch with red flowers. The style which the birds are drawn is also very attractive and pleasing to the eye. 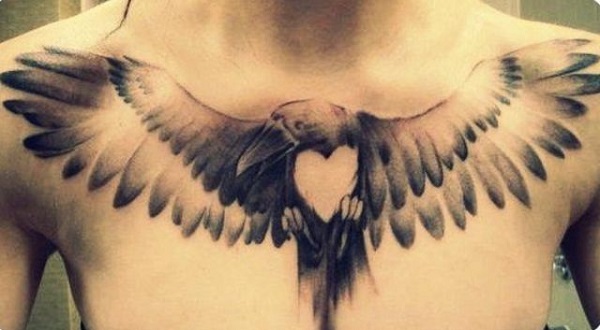 A widely drawn tattoo of a bird with a heart shaped crest. Its wings are extended to reach each of the sides of the person’s chest and greatly give a statement all on its own.

A lovely tattoo of a bird on a branch with flowers. Small birds on branches with flowers are one of the most loved tattoo designs you can find out there. Bird tattoo depicting a sad moment in life. The birds are shown to be standing on top of leafless tree branches with a seemingly fog forming beneath them and a dedication at the bottom. Cheery and colorful tattoo of birds on a branch. The flowers are also in bright colors complementing the color combination of the birds as well. Fashionable owl tattoo by Carly Kroll. It’s not everyday you see a fashionable looking owl. This design gives a new twist to bird tattoos and even throws in a bit if comical relief by coloring the owl with what seems to be eye makeup. Bird tattoo of a bird in mid flight. A wonderful looking tattoo that gives detail on the bird and its wings as it struggles to finish its flight. Tattoo of a bird with an amulet. The bird is given a fantasy feel to it with huge eyes, a big head and a mysterious and sort of magical background.